2.4GHz and 5GHz and their differences

The first things we need talk about are 2.4GHz and 5GHz and their differences as there’s a couple of big differences that we need to take into account when we’re doing spectrum analysis and it’s very important that we understand both of these differences. So let’s start by talking about 2.4GHz,  if you see 802.11b/g/n then you know that that’s probably a 2.4GHz  compatible device, the 2.4GHz wavelength is longer than the 5GHz wavelength so we see that it has a greater range, 2.4GHz will go about 300 feet but that’s going to depend on a lot of things, such as the equipment you’re using the environment how much stuff is around you even – whether it’s raining outside or not can affect range, so about 300 feet is what most vendors will say what approximately you’ll get with most  2.4GHz  wireless equipment.  In the 5GHz band, the wavelength is much shorter, they’re much closer together so we see a lower indoor range the signals attenuate faster which means they get blocked easier by things like walls, doors and windows, desks, filing cabinets and people, so the result is that we only see an indoor range of about 90 feet, so the range with the 5GHz band isn’t nearly as good.

Back in 1999 two wireless standards were introduced at the same time which were 802.11a and 802.11b, 802.11a could hit 54 megabits per second whilst 802.11b was limited to 11 megabits per second. Wi-Fi wasn’t even called Wi-Fi then it was just called 802.11 and for the most part it was being used for wireless barcode scanners in warehouses so when people were comparing 802.11b and 802.11a  and deciding which equipment to buy, ultimately they went for the standard that had a better range they ended up going for 802.11b because it was cheaper it didn’t require as much equipment to deploy and they didn’t need the fast speeds of 802.11a and we are still feeling the results of these events back in 1999 even today if you go out and buy a new wireless device it is going to support 2.4GHz out-of-the-box.

2.4GHz is universally compatible whereas the 5GHz band sees limited compatibility we don’t have nearly as many devices that work in the 5 gigahertz band, for example, there’s a lot of inexpensive Windows laptops and inexpensive Android phones and tablets that don’t support 5GHz if you look on the box if you don’t see 802.11a or 802.11ac on the box and you know it is not a 5GHz compatible device. It’s a single band device that only supports the 2.4GHz

2.4GHz has been a default band for so long now it is highly congested; with Wi-Fi, there are a lot of Wi-Fi devices that operate so there’s just a lot of activity that we have to contend with that we have to live with.

it’s also plagued with non-Wi-Fi interference if 2.4GHz is good for Wi-Fi devices it’s good for non-Wi-Fi devices as well, it’s an unlicensed spectrum so anybody can operate anything there as long as they stick to a few basic rules, a lot of people like the range and that works well for things like cordless phones wireless video cameras, even microwave ovens use the 2.4GHz band so we see a lot of non-Wi-Fi activity there, perhaps the biggest problem is that there are only three channels that do not overlap in the band channels 1, 6 and 11 whereas in the 5GHz band we have 24 channels that do not overlap and the amount of channels that we see here is to scale, the 2.4GHz band is tiny compared to the 5GHz band and that’s something that we need to be really careful about we’re trying to deploy a wireless network.

You may have been thinking yourself that there are 11 channels and some people might even say well I’m in Europe there’s 13, what do you mean there are only three channels I can use, the whole 2.4GHz band the usable space that we have for Wi-Fi, here in the UK is 100MHz available wide each Wi-Fi channel is 20MHz wide so when you do some basic maths you realise that there’s only really room for only three non-overlapping channels which are channels 1, 6 and 11.  Why do they overlap? If we look at how the channels are laid out we can see that channel 1 is 20MHz wide and then we and we go by the centre of channel 1 and define channel 2 we’re going up 5MHz so we’re just going go up to 5MHz and that puts us on the centre of channel 2, we can see that it partially overlaps the channel 1 by about 75% and that’s going to cause Co-channel interference which we want to avoid that at all cost. So the result is that we only get channels 1, 6 and 11 which are non-overlapping channels to work with and need want to stick with those channels. 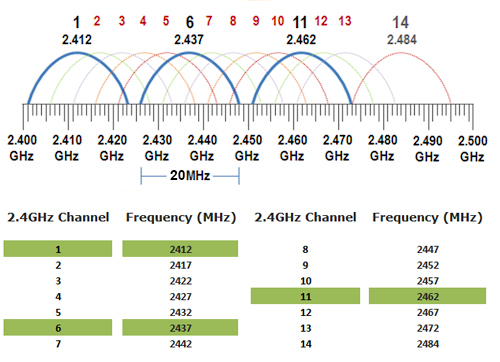 Several channels in the 5GHz band are subject to DFS restrictions (i.e. Dynamic Frequency Selection) to ensure that Wi-Fi networks and radar systems using the same band can peacefully co-exist. In brief, Wi-Fi systems must stop transmitting and move to a new channel if radar signals are detection a DFS controlled channel.

Most channels in the 5 GHz band, including 5725-5850 MHz, are subject to Dynamic Frequency Selection (DFS) requirements. These require Wi-Fi routers to scan for radars while connected and to switch the channel if radar transmissions are detected. These requirements were designed to protect radars from interference. However, implementing DFS can add cost to equipment and people using Wi-Fi can be negatively affected by delays to their connection. Additionally, DFS is not required in the 5725-5850 MHz band in other countries where the band is available for licence-exempt use, which further limits the use of this band in the UK as manufacturers must create equipment specific for the UK market; however, as of writing this they are in consolation to remove DFS.

The full consultation can be located here

2.4GHz and 5GHz and their differences
-END-