The 3-Tier of the common Network architectures design consists of three layer, the Access Layer, Distribution Layer and Core layer, the Access Layer is the layer that provides access connectivity for end clients or devices in the network such as PC’s, printers, Wireless Access Points (AP’s), IP Phones, IP cameras and so on. These switches will be Layer 2 devices

The Distribution Layer will contain modular switches that will aggregate the up-links coming from the access layer; this layer will carry out all the inter-VLAN Routing and also route traffic to the core for offsite destinations such as another site through the WAN or to the Internet.

The Core Layer is the most critical part of the network, typically these are chassis based Switches such as Nexus 7K’s with redundant components like power supplies.  The core is the point of concentration for the entire network. This Common Network Architecture can be found in larger business or campus sites

The 2-Tier of the common Network architectures design consists of the access layer and the collapsed core which is the Core and Distribution combined, this Common Network Architecture is suitable for small businesses.

The Core/Distribution will carry out or the Layer 2 and Layer 3, the Access Layer is the layer that provides access connectivity for end clients or devices

The above 2 and 3 tier common network architectures designs also known as  North – South because of its traffic flow, this is because PC’s on the access switches need to get to the internet which is through the core; North, then from the internet back to the PC’s is South of the core, the Spine and Leaf architecture – also referred to as East – West, this architecture is found in Data Centre’s and need greater speeds to access various server before serving up the information requested by the end user.

The Leafs which are also known as Top of Rack Switches and are where the servers connected into, each Leaf will be connected to every Spine which means the every other Leaf is only 1 hop away which makes it really fast.

If another Leaf is added then that will also have a connection into every Spine, so no matter how many Leaf’s you add, they will always be 1 hop apart, the aim of this Common Network Architecture is to have lightning speeds to all the servers from anywhere in the DC. 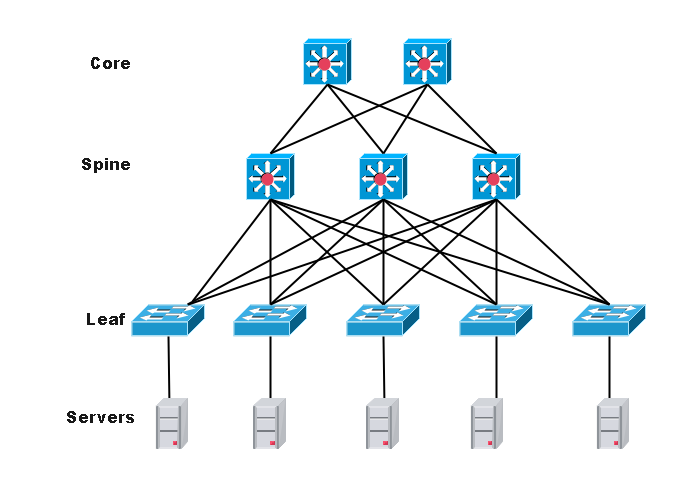 A typical WAN common network architectures design connection is either leased lines, MPLS or Metro E(thernet), as the internet is getting faster more companies are moving towards VPN to connect their remote sites.
MPLS and Metro are packet switched networks, this means the providers can provide virtual circuits between sites instead of everything tromboning through the headquarters.

Leased lines are typically T1 circuits, A leased line is a private bi-directional or symmetric telecommunications line between two or more locations provided in exchange sometimes known as a private circuit, unlike traditional PSTN lines it does not have a telephone number.

Leased lines can be used for telephone, internet or other data services, typically leased lines are used by businesses to connect geographically distant offices together, and unlike dial-up connections a leased line is always active.

Leased lines for example E1 is a digital transmission link with a total transmit and receive rate of 2.048 Mbps (2048000 bits per second).

Metro E(thernet) common network architectures service that is provided in a metropolitan area such as any major city, in the UK telecom providers and carriers provide many central offices in large cities.

To meet the needs of densely populated areas the result of these multiple providers and carriers is that most large cities are meshed in fiber and therefore Ethernet is more widely available to businesses located in these larger cities.

MPLS or Multi-Protocol Label Switching is a way to connect your sites together, you will probably want to use a VoIP solution across you wide area network (WAN), and probably will incorporate MPLS.

The MPLS common network architectures makes it much more efficient for businesses to send voice over the internet without poor connections and dropped packets, buildings that are in the same City can be connected together as can buildings that are 100’s or even thousands miles apart, MPLS bridges the sites together through the service provider’s router’s cloud on a private tunnel. This way, they have their own private connection going through that cloud. 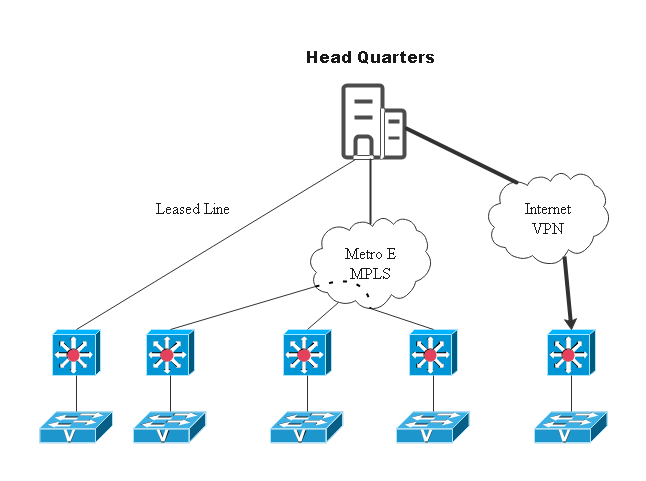 Small Offices and Home offices can vary in their Common Network Architectures, most will have a DSL/Broadband connection which acts as there gateway to the internet, it will also provide them with Wi-Fi for their devices to connect to the Internet, what home broadband Routers do lack in though is the number of Ethernet ports for direct connectivity, so in some cases a Switch of some kind is added to the Router to increase capacity.

To connect back to the HQ you will build a VPN tunnel between the sites, if you have an office at home you will normally have a VPN client on your end device such as Cisco Anyconect, for a Small office you would probably create a VPN tunnel from your Router back to the HQ 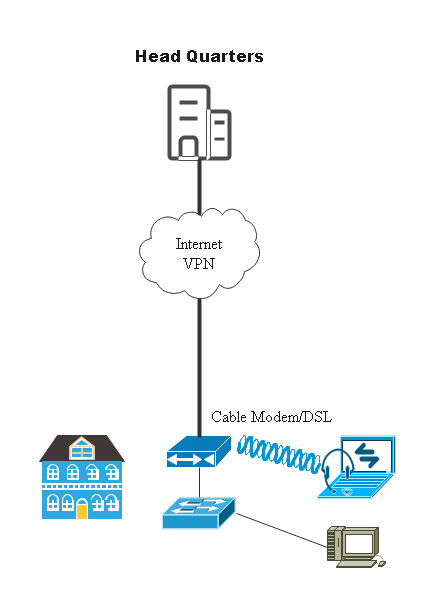 On Prem vs Cloud Architecture

Most business use a mix of both architectures, Office 365 is a public cloud as is Azure, AWS along with Google Docs and a lot more besides,  On Prem is where we host our DHCP server, AD servers, file and print server are also located on prem. Private clouds could be Co-Located Data Centre’s or other Data Centre’s you own but not in the same building as your network. 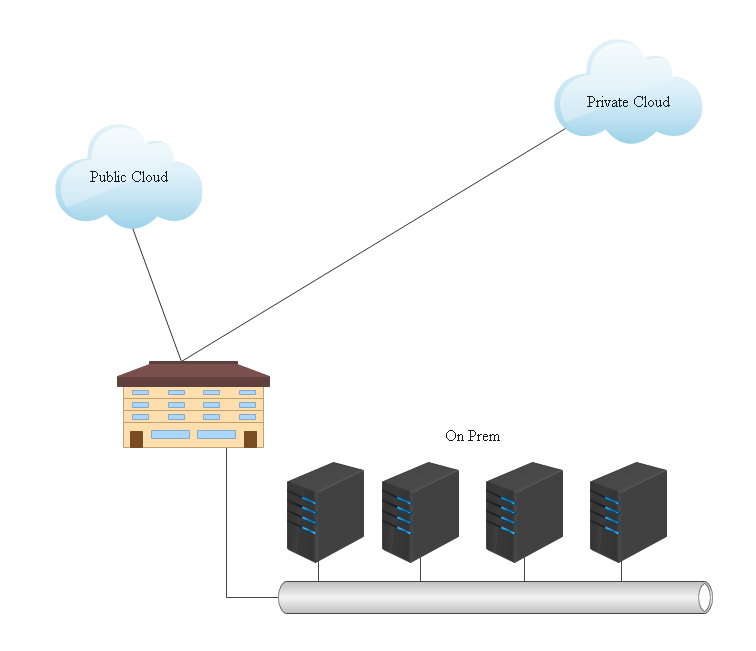