Over the past few weeks whilst I’ve been IT contracting with the government I’ve seen an increase in the Virgin Media Tech Support Scam, the one where you get a phone call with a recording saying that they have detected suspicious activity on your broadband line and that you should press 1 on your keypad to stop you from being disconnected. This has been captured below

At first, I thought this was another premium-rate scam where you press one and get charged a premium rate call; buts it’s not if you press 1 you will get put through to a scammer who will more than likely be in India somewhere, this particular Virgin Media Tech Support Scam has a company  (yes they set-up companies for this) are based Kolkata, India; with the sole purpose of getting as much cash out of you as they can.

As you are reading this I’m guessing that you know that you would not fall for such a scam but I’m also sure you will know of somebody that would, I know of a few, especially the elder in our community.

The number they call you on will be fake, these are provided by a company set-up in India named Dialer 360 which is basically a call centre application, I’m going to link to a video of the Virgin Media Tech Support Scam in action, its provided by a guy from Belfast who goes by the name of Jim Browning who I’ve followed for a while now, by the way, Jim is a fake name.

Jim actually spends all his spare time Scam baiting trying to get such call centres closed down, he reverse-connects their PC’s so he can see what is on their screens as well as what the scammer looks like, this particular scam last 5 hours which sees the scammers open a Monzo bank account.

This is the link to Youtube for Jim’s video of the actual Virgin Media Tech Support Scam taking place, notice how angry the scammers get too

Please let others know about the Virgin Media Tech Support Scam so that when they do get the phone call, they can just hang up and know that their broadband will not be cut off.

If anybody is interested in scambaiting with the sole purpose of wasting the scammers time, I may create another article on how to set-up a Virtual PC, hide the fact that it is a VM, hide behind a VPN as well as setting up the key logger and an outbound dialler, you don’t want to use your own number.

I’m also going to document what happens when you allow scammers onto your PC through remote desktop tools such as RremotePC and TeamViewer, however, this Teamviewer now flashes a popup stating that they have detected that the IP address if from India, hopefully, other RAT (remote access tools) software companies. 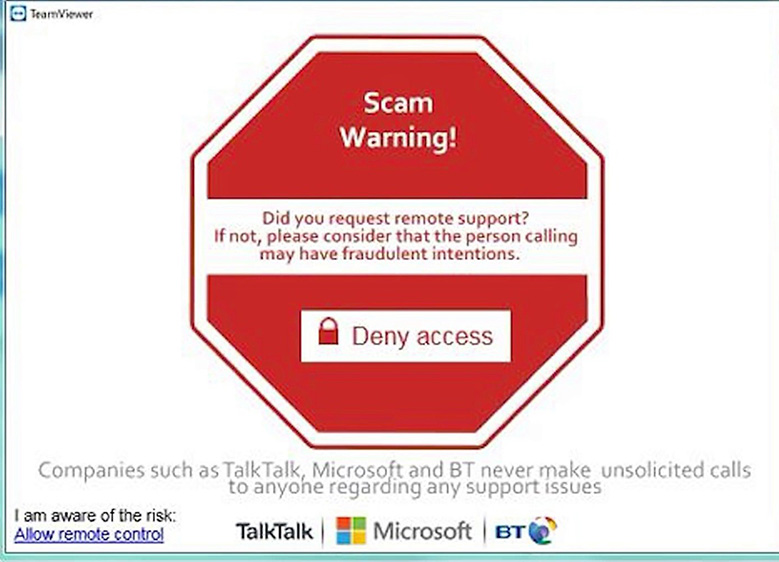 We are always adding to our articles, if you would like to see a particular post, please contact us and we will see what we can do